Crypto
105
No Comments
Share Tweet Share Share Pin it
An MMORPG  game that anyone can play for free. The first on-chain game of ITSBLOC  The gates will open at 26th of October, 5:00AM UTC. Please enter DK Mobile: Genesis as a Dragon knight to hunt monsters! About DK Mobile DK Mobile is an MMORPG work produced by the well-known game developer Ntrance. With the

An MMORPG  game that anyone can play for free. The first on-chain game of ITSBLOC

DK Mobile is an MMORPG work produced by the well-known game developer Ntrance. With the medieval fantasy world as the background, through exquisite 3D modeling and original storyline, players can become dragon knights to fight against evil forces and experience an immersive adventure experience. DK Mobile currently has three series, the first series “DK Mobile : Return of Heroes” has more than 1 million players worldwide since its launch in 2021. The second series, DK Mobile : The Origin, was launched in August 2022 and was also very popular with players with its unique P2E system. The third series DK Mobile: Genesis is planned to be launched and on-chain through ITSBLOC on 26th of October 2022.

In addition to no in-app purchases, DK Mobile’s unique P2E system, such as a season system that focuses on user play rather than mining, allows users to receive substantial rewards as much as time spent in the game. It is possible to acquire valuable items through monster hunting, quest clearing, PVP, etc., and it can be converted directly into the form of an asset. 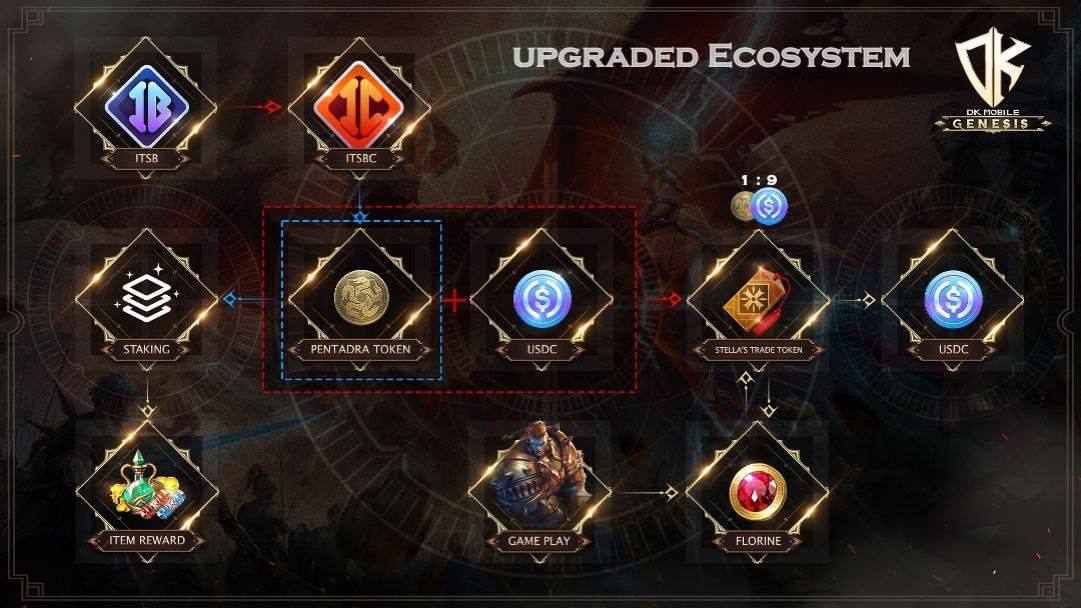 ITSBLOC is an independent development platform for Web3.0 games based on Polygon. It aims to help game manufacturers easily realize Web3 transformation through a sound blockchain technology stack and tools, and at the same time build a healthy and stable economic ecology so that players can obtain continuous game income. . ITSBLOC provides an excellent solution to the dilemma faced by the GameFi industry at this stage, bringing Web2.0 popular games with great growth potential into the Web3.0 field. This move not only makes up for the lack of gameplay of GameFi at this stage, but also greatly expands the market growth potential for Web2.0 games. Just recently, ITSBLOC also announced that it has received $7.5 million in investment from eight institutions including Vista Labs, Nexus one, and Edimus Capital.

The total supply of $ITSB tokens to be issued will be 1,000,000,000 and is currently listed on the Gate.io and MEXC exchanges

Disclaimer: ITSBLOC token (ITSB) is the Governance Token for the ITSBLOC ecosystem. $ITSB is used for staking and trading between game tokens.Events such as falling coin value, changing market environment, uncertainty, political risk, competition with competitors, and this can disrupt development of $ITSB tokens and platforms or change services.

What are the benefits of  DK Mobile:Genesis?

DK Mobile has proven to be extremely high in playability in previous versions of Web2. So this DK Mobile:Genesis launch will also be great fun for the players! DKMobile:Genesis’ in-game economic cycle is good, so it can maintain the longevity of the game.

In the game, there are five classic occupations for players to choose from: Paladin, Warrior, Archer, Warlock and Sorceress.

Different from the common level-breaking adventure mode in GameFi, DK Mobile:Genesis provides a world map mode with a higher degree of freedom, allowing players to explore and defeat the monsters they encounter. DK Mobile:Genesis  also includes a variety of game scenes such as dungeons, ruins, prisons, etc., with systems such as guilds, achievements, and tasks, to continuously stimulate players’ motivation to explore in the game. In addition, players can also experience various forms of PVP such as large-scale battles and siege battles in DK Mobile:Genesis , which further increases the playability of the game.

DK Mobile:Genesis is the culmination of the series, with the ultimate gaming experience, a base of millions of players, and the full support of ITSBLOC in terms of technology and resources. Beyond that, DK Mobile:Genesis is a free-to-play game. It is believed that once DK Mobile: Genesis is launched, it will become the most watched game product in the field of Web3.0.To learn more, please visit DK Mobile: Genesis’ official website and follow @DKmobileGenesis on Twitter.

I am a professional writer in the field of cryptocurrency. I have been writing about Bitcoin, Ethereum, and other digital currencies for over five years. My work has been published by some major publications such as CoinDesk, Forbes, and Business Insider.

Get our latest posts and announcements in your inbox.

The NFT Project Driving Freedom of Speech in Th . . .

THE Ape-Revolution of the Defi Space

The NFT Project Driving Freedom of Speech in Th . . .

THE Ape-Revolution of the Defi Space

I am a professional writer in the field of cryptocurrency. I have been writing about Bitcoin, Ethereum, and other digital currencies for over five years. My work has been published by some major publications such as CoinDesk, Forbes, and Business Insider.